"Ladies, gentlemen and children of all ages, you will not believe your eyes!"
―Ringmaster

The Ringmaster is a minifigure introduced in 2010, as part of the 8684 Minifigures Series 2. He has a black top hat, a white whip and a black stand for him to stand on.

The Ringmaster has black legs with a white belt. His body has a base colour of red, which is for a red waistcoat over a white shirt. He also has a black tie and a white flower printed on his body. His arms are red and he wears white gloves. He has a large moustache, and his mouth is open wide. He wears a black top hat. His one accessory is a white whip.

The Ringmaster appears in The LEGO Movie. 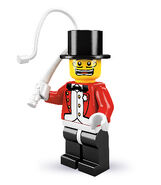 A CG image of the Ringmaster

The Ringmaster as seen in The LEGO Movie.

Deutsch Français
Community content is available under CC-BY-SA unless otherwise noted.
... more about "Ringmaster"
RDF feed
Accessories
Top Hat (Black) Whip (White) +
Appearances
8684 Minifigures Series 2 +
ArticleRating
2 +
Image
RM1!.jpg +
InfoboxTemplate
Minifigure +
ShopDescription
“Ladies, gentlemen and children of all … “Ladies, gentlemen and children of all ages, you will not believe your eyes!”<br />The Ringmaster loves being in the spotlight and running the show. He’s in charge of the entire circus, and he always makes sure to keep the tightropes tight, the sawdust fresh, the trapeze rings shiny and all the animals fed and happy. To the Ringmaster, the best thing in the entire world is the sound of the audience cheering and clapping all around the big-top circus tent. That’s why he always does his very best to put on the most spectacular show possible – and to outdo the performance from the night before!tdo the performance from the night before! +
Theme
Minifigures
Series 2 +
Title
Ringmaster +
Years
2010 +
Advertisement