"They were once men. Great kings of men. Then Sauron the Deceiver gave to them nine Rings of Power. Blinded by their greed, they took them without question, one by one falling into darkness. Now they are slaves to his will. They are the Nazgûl. Ringwraiths. Neither living nor dead. At all times they feel the presence of the Ring, drawn to the power of the One. They will never stop hunting you."
―Aragorn revealing the Ringwraiths' origin in The Fellowship of the Ring.

Ringwraiths, also known as Nazgûl or Black Riders, are minifigures from The Lord of the Rings released in May 2012.

The Ringwraiths wear a black hood and a tattered cloak. They have a blank black head, and a black torso which printing has a robe design. The back of their torso features a continuation of his robe printing. Their legs, arms, and hands are also coloured in black.

The Ringwraiths were originally nine kings of Men, tempted one by one by the Dark Lord Sauron using his One Ring over their nine rings, through betrayal, greed, suppression, or alliance. They resided in the cursed fortress of Minas Morgul ruled by the first Nazgûl, the Witch-king of Angmar. They were assigned to hunt down Frodo Baggins and reclaim the One Ring for their master Sauron. They tracked Frodo, Aragorn and company across the Shire, finally finding them at Weathertop where Aragorn defeated them using fire. However, not before the Witch-king stabbed Frodo with a cursed Morgul blade. Arwen, the daughter of Elrond, then took the fading Frodo to Rivendell to be saved be her father, and the Nazgûl steeds were swept away by the waters of Bruinen. After this the Nazgûl reverted to riding the dragon-like Fell Beasts. The Witch-king was later defeated by Éowyn at the Battle of the Pelennor Fields as justice for killing King Théoden. Khamùl and the other remaining seven Nazgul were killed when the Ring was destroyed, caught in the fire storm of Mount Doom. 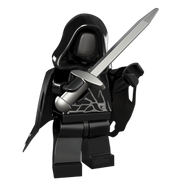 A Ringwraith on his horse 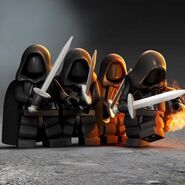 The Ringwraiths before they were corrupted. 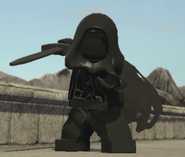 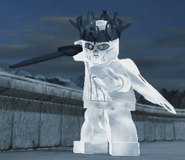 Retrieved from "https://brickipedia.fandom.com/wiki/Ringwraith?oldid=2001110"
Community content is available under CC-BY-SA unless otherwise noted.
... more about "Ringwraith"
RDF feed
Accessories
Hood, Cape, Sword +
Appearances
9472 Attack on Weathertop +
ArticleRating
3 +
Image
lor018.jpg +
InfoboxTemplate
Minifigure +
ShopDescription
Ringwraith™ Ringwraiths, also known … Ringwraith™</br></br>Ringwraiths, also known as the Nazgûl, are dark phantoms - neither alive, nor dead. The Ringwraiths were once great kings of Men, all given Rings of Power. Corrupted by power, and the One Ring, their bodies have faded into broken shadows and their minds and souls have been destroyed by their constant need to follow the Ring. They are most powerful in the dark. Daylight weakens them, they cannot see well, and they are not able to move through or across running water.e to move through or across running water. +
Theme
The Lord of the Rings +
Title
Ringwraith +
Years
2012 +