Rinona is a minifigure who appeared in Legends of Chima in 2014. She is a member of the Rhinoceros Tribe.

She unlike the other Rhinos is smart and intelligent. In the episode A Tangled Web it was revealed that she's the one who's been driving Rogon's truck. Eris becomes jealous of her from hearing she's Rogon's "special Friend". She later joins the other heroes at Lavertus's Base in the Outlands. In The Legend Thief Eris accuses her of stealing Lavertus's golden chi. She later appears and uses her Hammerhorn to smash fruit to start the Speedor race between Chima's heroes and Lavertus. She makes a cameo at the end of the episode when the heroes celebrate with cupcakes at Lavertus's base. In The Eagle and The Bear she tries to help Worriz find the Wolf Legend but hits him several times with a periscope. She is revealed to be Rogon's sister. In The Snowball Effect, she says how hard it is to be the only rhino whose intelligence isn't boosted by the Legend Beast. When the mammoths attack, she and the fire chi become trapped underground. She later finds the rhino legend and comes to the rescue for Rogon, Rukus and Runk.

Fire Chi Version
Add a photo to this gallery 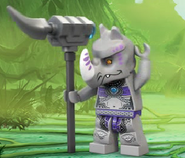 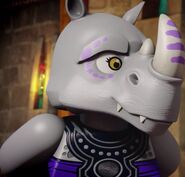