Rise of the Spinjitzu Master

"Rise of the Spinjitzu Master" is the 26th and the Season Finale of Season 2 of Ninjago: Masters of Spinjitzu.

It begins in Ninjago city, where the Overlord and his Stone Army arrives and corrupts it, meeting some short-lived resistance from Dareth. Meanwhile, the disheartened ninja are stuck on the Dark Island while Dr. Julien is bandaging Lloyd's leg, informing him that it will be weeks before Lloyd can fight again, much to Lloyd's dismay. Lloyd convinces the ninja that they never quit, and that they must continue fighting despite their setback. Above them, the Falcon returns and flies to the Temple of Light. The ninja don't know why they should be there, until Kai finds a key hole for his elemental sword. The other ninja quickly finds their key holes, revealing a mech for the First Spinjitzu Master. Lloyd starts it up, but the other ninja don't know how to get to Ninjago, until the Ultra Dragon returns and the ninja fly to Ninjago.

Once the ninja, Lloyd, and the others reach Ninjago, they notice that the Overlord has created a fortress out of the Garmatron, and at the top is the Overlord, now having absorbed enough evil to obtain his true form--a mutated dragon monster. The ninja charge the fortress, only to be attacked by the Stone Army. Lloyd takes off in the mech, and he manages to get into the fortress, only to have his mech destroyed by a turret, manned by Nya. The ninja come to help Lloyd, and they fight off the Army. Dareth comes back, and manages to find the Helmet of Darkness, which he puts on, inadvertently granting himself control over the Stone Army. He commands the Stone Army to cease fighting and attack the Garmatron, and the ninja help Lloyd up to the top of the fortress so he can face off against the Overlord. The Overlord begins firing blasts of dark matter at the ninja while they are helping Lloyd up the stairs. Cole and Jay are hit, which changes them into evil beings, just like Nya. Kai fends off Nya, and Zane fights Cole and Jay (only to become corrupted later), while Lloyd manages to get up to the roof, where the Overlord is, and the final confrontation between good and evil begins.

Lloyd manages to create the Golden Dragon again despite the Overlord's initial attack, but is then fused with the dragon, changing his kimono from green to gold. Now, as the "Ultimate Spinjitzu Master", Lloyd is an even match for the Overlord. Both masters of light and shadow fight, but it becomes apparent after a period of fighting that neither can best the other. In an attempt to snuff Lloyd's golden power, the Overlord enlarges to become a giant and devours Lloyd and the golden dragon. But, flashes of light begin to come out of the Overlord's mouth and he explodes in a burst of light, which purifies everything of the darkness that plagued them.

The ninja realize that good has won and they cheer Lloyd, still in his golden kimono, for his victory. Misako goes to comfort Lloyd about his father, when a bunch of debris starts moving, and Garmadon comes out, completely cleansed of his evil, and Sensei Wu, Misako, and Lloyd all walk over to him and rejoice amongst themselves. The ninja come together, proclaiming that, despite the Overlord's defeat, they will continue to fight against evil whenever it uprises. Then, with the heroes rejoicing, the episode fades off into the sun. 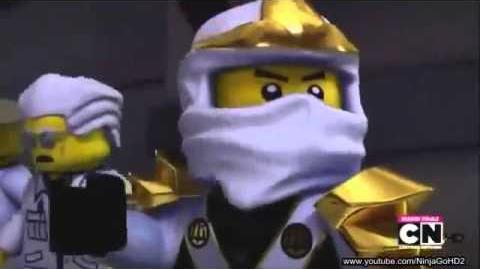