The Robber Chief,[1] also known as the Robber King,[2] is a Ninja minifigure introduced in 1998.

The Robber Chief wears a green vest over a red shirt, and wears a black samurai helmet. His face somewhat resembles Johnny Thunder's head with its black sideburns and mustache, although he has a scowling expression. He typically wields a katana or flintlock pistol.

In the LEGO World Club Magazine Time Cruisers comics, the Robber King is depicted as an overweight man, with Ingo imagining him looking like a pig.

In the Studios theme, the Robber Chief wears a black fedora instead of a samurai helmet.

As suggested by his titles in LEGO Adventures! and World Club Magazine, the Robber Chief is the leader of the robbers, bandits, and black ninjas plotting to steal Shogun Gi-Dan's treasure. However, in LEGO Mania Magazine, the leader of the bandits is Chief Kendo instead, leading to discrepancies between publications regarding which robber is the true leader.

In the Time Cruisers comics, the Robber King has stolen Gi-Dan's blue sapphire, whose owner rules the country. The Robber King and his Black Ninjas catch Tim, Ingo, and the Shogun's samurai planning to take back the sapphire. Ingo jumps on his helmet and creates a distraction, allowing Tim and Ingo to hijack Kendo's cart and take the sapphire back to Gi-Dan.

In a Japanese commercial, the Robber Chief is depicted with a skull for a head at the start and end. He leads the Black Ninjas to attack the Flying Ninja Fortress, but the Red Ninja Master appears in their path, builds the Emperor's Stronghold, and sends out the Blaze Attack to shoot the robbers with its cannon. They are ensnared with a net, but the Robber Chief escapes.[3]

The Robber Chief appears as an actor in the Studios theme.

The Robber King in the Time Cruisers comics 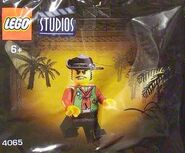