Robin, aka Dick Grayson, is a DC Comics minifigure first released in 2014. In-universe, he was Batman's first Robin. However, he then becomes the superhero, Nightwing and is succeeded by Jason Todd. Robin first appeared in the summer 2015 Super Heroes wave in his New 52 and Teen Titans outfit.

This version is based on Dick Grayson as Robin in the New 52. He uses the Skater's hair, and Damian Wayne's head. He wears a black cape. His outfit is primarily red, with green and yellow accents. His torso features shoulder straps with the "R" symbol and layered armor on the lower half. He wears a dark green belt with yellow lights above it. His arms are black, and his legs and hands are dark green.

This version of Robin is based off Dick Grayson in the Teen Titans animated shows. He uses spiky hair in black, and reuses the 2012 Robin's head. He wears a yellow cape. His torso is very similar to the 2012 Robin, and he has dual-colored arms to simulate green short sleeves. His hands and legs are green.

Robin's 2014 variation has the same hairpiece as the 2012 Robin, with a redesigned version of the original Batman, Robin (Tim Drake), variation's face with a larger, more angular green mask and a larger, tilted grin, similar to Nightwing's new face and a second face with a scared expression. He re-uses the new torso. The cape is now short and yellow and the legs are green with red hips.

This version of Robin is based on Burt Ward's portrayal of Robin in the classic 1966 television series. His hair is the same as Tim Drake's, and his face shows his black mask with blank white eyes. On one side, he has a determined grin, but on the other side, has a distressed expression. His torso shows his red uniform with yellow details, a belt, and his "R" symbol, and his arms are dual-molded to show short green sleeves, and his hands are green to match. The green lower part of his uniform continues to his legs. There is a section of flesh to represent bare legs, with green boots below. Robin wears a short yellow cape.

The LEGO Batman Movie Robin has wavy, brown hair and green tinted glasses. His costume is similar to the 1966 Robin, except his boots are red and his shorts are shorter. He is the film's false deuteragonist and the film's true tritagonist.

As a child, Dick Grayson was part of a circus act known as The Flying Graysons. One night, his parents were murdered during the act. Dick was then adopted by Bruce Wayne, the better known as Batman, who recruited Dick to become his crime-fighting sidekick Robin. After years of serving as Robin and working with Batman and Batgirl, Dick grew tired of being overshadowed and chose to strike out on his own. Around this time, he formed the Teen Titans with other sidekicks and young heroes, such as Kid Flash, Wonder Girl, Cyborg, Raven, Beast Boy, Starfire (one of his prominent love interests and in many portrayals his girlfriend), among others and fought villains such as Deathstroke, Brother Blood, and even Trigon. His responsibility as leader of the Titans reached a point where he wasn't able to dedicate time to his other role as Batman's sidekick. Dick then adopted the mantle of Nightwing (a name taken from a kryptonian legend told to him by Superman) and retired his Robin mantle, which would be used by Jason Todd later, therefore dedicating himself to be the Titans' leader full-time.

Robin in The LEGO Batman Movie

Robin in the Batmobile with Batman 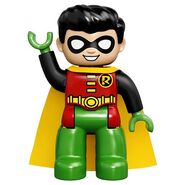