The Robo Foot Ninja is a Teenage Mutant Ninja Turtles minifigure released in 2014.

After his standard Foot Soldiers failed to defeat the Turtles time and time again, the Shredder formed an alliance with The Kraang in which they provided robotic soldiers modeled after the originals. These Foot robots possessed a larger arsenal and the ability to sprout multiple limbs, and could also learn the fighting styles of their opponents. However, over time the Turtles learned how to deal with and defeat them with relative ease. 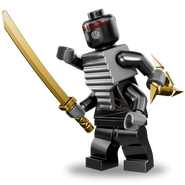 CGI Robo Foot Ninja
Add a photo to this gallery