Robo SWAT are minifigures from The LEGO Movie. They appeared in seven sets based on the movie in 2014. The Robo SWATS are voiced by David Burrows alongside the other robots that work for Lord Business. 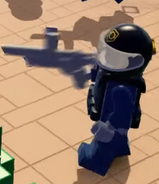