The Robot is a minifigure who appeared in the video game LEGO Battles.

While it does not appear in any Mars Mission sets, the Robot combines the elements of small robots seen in 7646 ETX Alien Infiltrator and 7648 MT-21 Mobile Mining Unit. It has the body, claws, and binocular eyes of the 7646 robot, combined with the base and wheels of the 7648 robot.

The Robot is referred to as a surveillance robot in "Stranded". It is used for a multitude of tasks, including storing memory, monitoring Alien activity, and keeping security codes.

In the gameplay of LEGO Battles, the Robot cannot be built, unlocked, or used in Free Play, but can controlled as a playable minifigure unit in specific Story missions. It has 300 health points, moves at a slow speed, and has a slow, weak, melee attack where it fires a jolt of electricity from its claws.

The Robot can be found as an NPC in various Earth Command levels and gives hints when approached by friendly units. In "Stranded", Earth Command uses a Transport Ship to rescue the Robot and bring it back to base. In "Mothership Connection", Earth Command captures two Robots that have the security codes to access the Mothership; despite these two Robots being part of the Aliens' faction (until approached and converted by Earth Command), they appear identical to Earth Command's Robots and are not hostile units.

The unlockable "Earth Picture 2" concept art shows a Robot beside Commander Cold as they observe purple Energy Crystals on Mars. 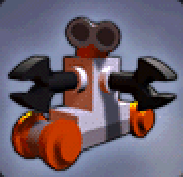 Concept art of a Robot and Commander Cold
Add a photo to this gallery
Retrieved from "https://brickipedia.fandom.com/wiki/Robot_(LEGO_Battles)?oldid=1999731"
Community content is available under CC-BY-SA unless otherwise noted.