A Robot Sidekick is a Galaxy Squad minifigure released in 2012. It works for the Blue Squadron.

The robot sidekick has a new mould for its head, which is blue with a large orange left eye and a slitted black one on the right. It's torso and arms are light grey and it sports black hands. It has printing of grey armour lined with blue, black and white along with insignia in the upper left corner. The legs have printing of grey and white knee armour.

The back printing continues that of the front and has a white gear in the center, inside a blue rectangle.

The Blue Robot is the sidekick of Blue Team leader Solomon Blaze, and helps him in the set 70703 Star Slicer. It appears in the smallest set, 70700 Space Swarmer, defending itself against the Space Swarmer, with an Alien Buggoid as pilot. 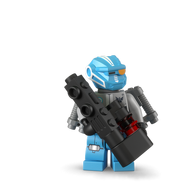 The Blue Robot faces off against the Alien Buggoid