These monsters, though only in two sets, were in numerous areas in the the Rock Raiders PC game. In the PS1 Game, however, they were a rare sight. Rock Monsters are tough, and easily recognized by their large size and growling when near one. A Rock Monster has been seen to blend into the rock terrain of the caves in a cutscene, though this is not shown in detail in-game. Though somewhat slow, they are deadly, and can destroy vehicles, buildings and even Rock Raiders. The only way to defeat these monsters is to get a laser-based weapon and zap it until it's defeated. The monster then dies, leaving two or three baby Rock Monsters behind, which run away, although they have been known to stay around base.

Rock Monsters are not only found on Planet U, however. The Rock Raiders game manual details an encounter Chief had with one in his youth:

Very little is known about Rock Monsters, since only a few have ever been seen before. There is a rumor that Chief encountered one in his youth, but he has never talked about the experience to anyone! The only information that exists are these notes that he made on the ship computer: "The creature appeared to be made of Rock and stood at least twice as tall as me. It had fiery eyes and a fearsome roar that almost turned me to stone! I was terrified as I watched it eat a great pile of Energy Crystals. Once it had finished it seemed to just disappear into the Rock!"

Furthermore, Rock Monsters have several appearances in LEGO Island 2, none of which are on Planet U. In the PC version, they first appear in the Adventurers Island jungle, throwing boulders at Pepper Roni as he flies past them in a biplane. Differently textured Rock Monsters later appear floating in space as Pepper parachutes onto Ogel Island. In the GBC version, a Rock Monster is fought in a pirate cave beneath LEGO Island.

It's also worth noting that an Ice Monster named The Berg appears in the Arctic in LEGO Racers 2, continuing the trend of the monsters appearing in places other than just Planet U.

In the three Rock Raiders books, Rock Monsters behave much the same as in the games. There is also evidence found by the Rock Raiders in High Adventure, Deep Underground that the monsters once were an intelligent civilization. 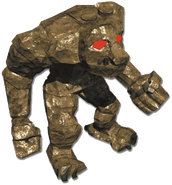 A Rock Monster from the Rock Raiders manual

A Rock Monster in one of the Rock Raiders cutscenes 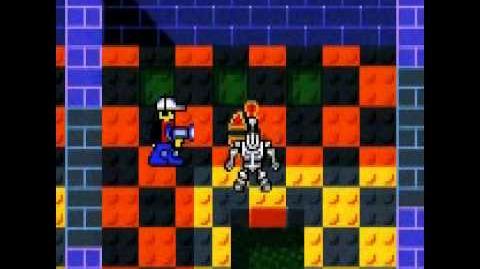 LEGO Island 2 (GBC) - Pirate Cave
The pirate cave in LEGO Island 2 for GBC, with a Rock Monster boss fight at 2:13