The Rocker Girl is an upcoming Collectable Minifigure to be released in 2012 as one of the sixteen minifigures from 8831 Minifigures Series 7. She has pink hair and a a blue, pink and black outfit. She will have the same guitar from Series 4's Punk Rocker, only it will be white. 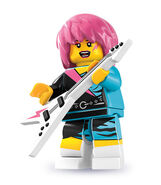 Retrieved from "https://brickipedia.fandom.com/wiki/Rocker_Girl?oldid=904395"
Community content is available under CC-BY-SA unless otherwise noted.