"Guardians of the Galaxy" Variant

Rocket has a special Head-Mold with brown shoulder-pads, and a Raccoon-Like head. His torso has printing similar to a space-suit and like his legs his torso is Flame Yellow. He also has dark grey arms and hands to represent a sleeveless shirt.

Rocket Racoon sports a torso very similar to Star Lord's, and uses his Guardian's Head-Mold but with dark red shoulder-pads. He has dark red arms with dark grey hands and dark red legs. His arms and legs are printed as well. This version was also released as a polybag in November 2014.

Rocket Raccoon has a new moulded head resembling a raccoon printed with white streaks and black around his cartoony eyes. He has a blue torso with red hands that is printed with brown buttons, a belt and a red embroidery around the flap and bottom of the torso. He has short blue legs and a brown tail. He is armed with a machine gun.

Rocket is an alien, very similar to a Raccoon and part of a team known as the Guardians of the Galaxy, which also includes Star-Lord, Gamora, Groot, and Drax. He is also Groot's best friend. 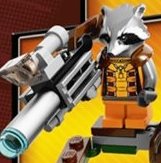 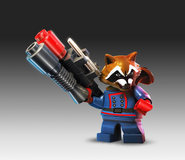 Rocket Racoon and Deadpool on his scooter

Retrieved from "https://brickipedia.fandom.com/wiki/Rocket_Raccoon?oldid=1841683"
Community content is available under CC-BY-SA unless otherwise noted.