Rocket Racers is a former attraction in The Beginning area of LEGOLAND Windsor, first opened in 2000. It was an arcade style game based on LEGO Racers, with the software for it developed by Attention to Detail, who also developed LEGO Racers 2 (which released the following year in 2001).

When the attraction first opened, it was simply named LEGO Racers. It was later renamed to Rocket Racers in 2003, when LEGO Racers 4D launched in LEGOLAND Windsor.[1]

Internally, it was named LEGO Racers LBE, or simply LEGO LBE, with LBE standing for Location Based Entertainment.

The attraction was initially open from Christmas 2000 to the end of the 2004 park season, when it was closed due to issues with reliability and availability of spare parts. After years of sitting unused for anything but storage space, it was revived for the 2009 season, with updated software and hardware. It was eventually closed again on October 9, 2011, this time permanently, for largely the same reasons.

The attraction first led guests through a richly themed queue line, with most of the decoration based on the game's Space track. The queue line also featured portraits of the original game's bosses on the walls, and a lengthy video playing on TV screens, similar to the animated intros from other LEGO video games of the era. The video showed a race between various characters, commentated by Barry Baloney (who would later re-appear in Soccer Mania).

After proceeding through the queue line, guests were shown a video tutorial for building their drivers and cars, narrated again by Barry Baloney, with a minifigure named Larry going through the process as an example. Guests were then guided into a room with 8 touchscreens to do it themselves. There were six of each minifigure parts to choose from - heads, facial expressions, hats, bodies, and legs. Guests were then presented with a choice of 3 car chassis, each of which had 3 bodies to choose from. Finally, they would enter their name. Time was limited on each stage, with selections made randomly once the timer expired.

Guests would then proceed to the racing room, where there were 8 racing pods. Each driver had to try to complete at least three laps in three minutes. There were two tracks, the first based on Magma Moon Marathon from the original LEGO Racers game (featuring Exploriens as in the original track, with the addition of Space Port), and the second being an Adventurers Egyptian track.

Brick-built statues of Rocket Racer and Captain Redbeard could be found on a winner's podium, with the #1 spot available for guests to take pictures.[2] Some brick-built Rock Raiders figures could also be seen around the queue line, such as Jet climbing one of the crystals.[3]

A screenshot from an archive of ATD's official website

One of many screenshots shared by a developer

An unused sky texture also shared by the developer

A behind the scenes article in LEGO Adventures! Magazine Issue 19

A behind the scenes article in LEGO Adventures! Magazine Issue 19

A behind the scenes article in LEGO Adventures! Magazine Issue 28

A behind the scenes article in LEGO Adventures! Magazine Issue 28

The brick-built statue of Rocket Racer

A work-in-progress render of the queue line video 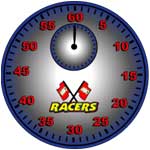 Basil the Bat Lord's portrait in the queue line