"Why rocks why? I thought we were friends!"
―Rogon after crashing into boulders.

Rogon is a minifigure that appears in the Legends of Chima TV Series. He was released in 70131 Rogon's Rock Flinger, a 2014 set.

Rogon was first seen playing hide and seek with Laval, Worriz, Skinnet, Eris, and Cragger. He was later seen in the speedor tournament jousting against Bladvic and Laval. He along with the rest of the Rhino Tribe are strong but are not very smart. They make a big deal in rocks and consider rocks to be important. In episode 10, it is revealed he has a crush on Eris. He is almost killed by Worriz in the same episode, but is awakened by Eris' kiss. When he leaves for the outlands in Into the Outlands he brings his truck and says it's full of essentials. The "essentials" are all of Rogon's rocks. In A Tangled Web it's shown that when a Rhino is within a certain distance of the Rhinoceros Legend they become super intelligent. Using rocks he builds a giant abacus to do calculations with. He also reveals that it wasn't an auto pilot (a rock with a "pretty face" drawn on it) driving his Rock Flinger, but the Rhino Rinona. Eris becomes jealous when she hears that Rinona is his "Special Friend". She becomes more jealous and worried when Rogon says that a friend is special for a unique affection or attachment to a subject. He frees his legend beast by using the power of rolling rocks to break the legend beast's trap. At Lavertus's base he's back to his old self which Eris likes. Rinona agrees with her as well.

He later joins the heroes in the Final battle against the dark tribes in the Outlands.

He becomes intelligent from the Rhinoceros Legend in Fired Up! along with Rukus and Runk.

In The Snowball Effect, he and the other rhinos (Now intelligent to their legend beast), use it's fire roar to turn rocks into bars of gold, steel and silver. When the Mammoths attack, Rogon, Rukus and Runk discover they can snowboard and play with the mammoths. After playing hockey with them, Maula orders they attack the rhinos. Rinona comes to their rescue with the legend beast and Fire chi.

In The King Thing, he and the other rhinos discuss playing with the mammoths which is a problem because they're enemies. When he brings an ice sculpture of them and the mammoths working together, it melts. He says that back home when he's with the rhino legend everything makes sense, but when he leaves, it doesn't.

Rogon in his Fire Variant 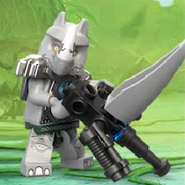 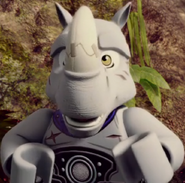 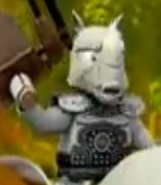 Rogon's 2014 variant in Legends of Chima: The Animated Series 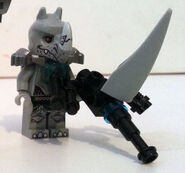