Brickipedia
Register
Don't have an account?
Sign In
Advertisement
in: Class 3 articles, Minifigures (theme), Minifigures introduced in 2013,
and 3 more
English

The Roman Commander has yellow legs, a crimson waist, a stone-grey torso, yellow arms, and yellow hands. Crimson and brown printing on his legs make it appear that he is wearing a skirt, and some thin printing on his feet give the impression that he is wearing sandals. His torso is printed to have the appearance of armour. The armour appears to be muscular due to muscle lines, and features a decoration of a wolf's head at the top. A brown rope is printed diagonally across his torso, and a brown belt is visible at the bottom. He has a yellow head with brown eyebrows, black eyes, white pupils, and a serious-looking face. These features combine to give him a serious frown. His light grey helmet is similar to that of the Roman Soldier, except it has a large red plume on top. Plumes of horsehair were worn by those of centurion rank and above in the Roman army. Commander's plumes went from left to right and the ranks above went from front to back. He wears a red cape and carries a gladius sword. 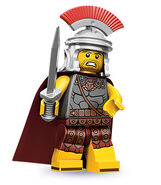 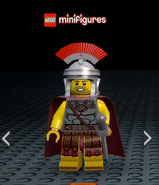