Ronan is a Kree who finds himself unable to accept his people's peace treaty with Xandar, because of them murdering his ancestors, so he takes control of the Kree Empire, creates a Sakaaran army, and decides to assist the evil mad titan, Thanos, to further his goal of destroying Xandar. To retrieve an orb in exchange for Thanos to destroy Xandar for him. However, two of his highly skilled assassins, Gamora and Nebula betrayed him and their adoptive father, Thanos, while Ronan's agent, Korath, was killed. Ronan had also killed Drax's family. 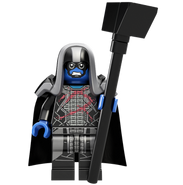