Ronan the Accuser is a Marvel Super Heroes minifigure that will appear in 2014.

Ronan is a Kree Accusser, in charge of enforcing the Kree law. The Kree attempts to add Earth to their empire has put Ronan in conflict with the Avengers and other heroes.

Ronan is a Kree who finds himself unable to accept his people's peace treaty with Xandar, so he goes rogue and assists Thanos to further his goal of destroying Xandar. 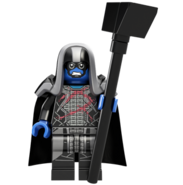 Ronan in-game
Add a photo to this gallery
Retrieved from "https://brickipedia.fandom.com/wiki/Ronan_the_Accuser?oldid=1625500"
Community content is available under CC-BY-SA unless otherwise noted.