Brickipedia
Register
Don't have an account?
Sign In
Advertisement
in: Class 3 articles, Ninjago Minifigures, Minifigures introduced in 2015,
and 2 more
English

Ronin is a Ninjago minifigure who first appeared in LEGO Ninjago: Shadow of Ronin and then Ninjago: Masters of Spinjitzu. He is physically released in the sets 70735 Ronin R.E.X. in August 2015, and 70592 Salvage M.E.C. in summer 2016. Ronin is a mercenary and thief who often joins whichever side pays him most. However, he considers the Ninja as his friends and has assisted them in multiple occasions.

Ronin wears Sensei Wu's straw hat in brown-red. Like a standard, non-licensed minifigure he has a yellow head. His head is printed with a face with orange eyebrows, a shaved beard, a smile, and what appears to be a lens, cybernetic eye, or eye patch. He also has a mask used in Ninjago's 2014 wave in brown-red. Ronin has a blue-ish green body with green militarist armor printed on it. His left arm is orange. Ronin has a sword holder on his back, where he is holds two black swords. He is armed with two black guns, which shoot gold studs. He is the first physical Ninjago character to wield guns.

In the game and TV series, Ronin is often shown without his mask or hat, and has Snape's hairpiece in orange.

In LEGO Ninjago: Shadow of Ronin it was revealed that Ronin is a mercenary who has an army of samurai goons. He was associated with Chen and was responsible for kidnapping Zane and possibly P.I.X.A.L..

Since Zane had lost his memory when he woke up on Chen's island, it is very likely that Ronin had used his Obsidian Glaive on Zane, and had stolen his memories.

In the game, Ronin Warriors attacked the Ninja, while they were training in the village of Spinjago. After they were defeated by the Ninja, Ronin came in a samurai disguise and attacked the village with fireworks, but was cornered. However, he then revealed the Obsidian Glaive, and stole the Ninja's memories, while escaping on Reks. After a failed attempt at capturing Hibiki, he attempts yet fails to keep the Ninja from their Obsidian Weapons. During Zane's flashback, it is revealed he is the one who stole Zane for Chen as a mercenary. Also, as Jay recovers his Obsidian Nunchucks, he reveals he has recovered the Forge of Lightning, more powerful than the Ninja's powers. While his goons fail to recover the Forges of Fire and Ice, he finds the Forge of Earth. He then makes his way to the Vault of Ice, and recovers all of the Forges. At some time, he put memories of betrayal from the Ninjas in Misako's mind, leading to him buying time from them while he steals the Primal Fulcrom and escapes to Chen's Island. There, he combines the Forges and the Fulcrom to open a portal between the Cursed Realm and Ninjago (World). He uses the Forge's power to create large elemental constructs of himself, but after a being's release, he escaped on Reks.

Before the Soul Archer was banished, was mentioned that Ronin owed the him a large debt. If Ronin does not repay him, Soul Archer will then take his soul to the Cursed Realm.

Ronin first appears in the TV series in "Stiix and Stones", where he is seen stealing a scroll on Airjitzu. He was attacked by the Green Ninja possessed by Morro and Morro's ghosts, but managed to escape the library with the scroll. Later, the Ninja visited his pawn shop at the City of Stiix, asking him where he kept the scroll. However, Ronin refused to tell the Ninja, and informed he would give it to them for $450. At night, Morro and Soul Archer visited his shop, tying the thief up and demanding for the Airjitzu scroll. At the same time, the Ninja also snuck there, trying to find the scroll. After the two groups met, they battled for the scrolls. Ronin soon discovered that his Aeroblades are capable of defeating the ghosts, and gave them to the Ninja to do battle with. Meanwhile, Ronin escaped with the scroll on Reks, but was stopped by the Soul Archer. Morro then took the scroll, learning Airjitzu and escaping from Stiix. Meanwhile, Kai was stuck on a stake, but was recued by Ronin on Reks. However, Kai was recued for a price; his and the Ninja's share from Steep Wisdom.

In "The Temple on Haunted Hill", he appears talking with Sensei Wu and Misako about the sales of the shop. Later, he meets Nya who then pays Ronin escape from her Ninja training and help the Ninja as Samurai X, her alter-ego. They arrive at the Samurai X Cave, were ghosts had taken over. Nya and Ronin tried to battle the ghosts, but lost. The ghost then turned the Samurai Mech into Mechenstien and Morro attempted to steal Reks. However, it started to rain, allowing the ghosts to flee, along with Morro.

In "Peak-a-Boo", Ronin makes fun of the Ninja's airjitzu skills while eating an apple at the top of the Destiny's Bounty. However, Jay makes it to the goal and steals Ronin's apple.

In "Kingdom Come", Ronin is seen on the Destiny's Bounty.

In "The Crooked Path", Ronin betrays the and Ninja attempts to steal the Sword of Sanctuary, so he can give it to the Soul Archer. He is stopped by Nya, but then fights Nya, kissing her and taking the sword. He escapes on Reks and goes back to his shop, which Morro and the ghosts took his shop over. Morro then possesses Ronin, and uses his body, to send a hologram to the Ninja, giving them the location to the Caves of Despair. Then then took the sword and mocked Ronin. However, Ronin sent the Reks to save the Ninja.

In "Public Enemy Number One", the Ninja have become the most wanted criminals. Ronin is hired by the Police Chief to capture all the Ninja. Ronin succeeds, getting "anything he wants" in return.

Eventually, it was revealed that the Ninja were framed. The police and Ronin assist the Ninja once again.

In The Dark Island Trilogy Ronin accompanies Misako to the Dark Island to investigate the disappearance of fisherman, only to be captured by Sky Pirates under Clouse. Despite this, Ronin succeeds in building a Salvage M.E.C., which he later uses to help Nya and Jay fight off the Pirates and a dark matter corrupted Leviathan. He continues to fight alongside the Ninja as they face Clouse in a battle for the fate of Ninjago.

In Day of the Departed, Ronin takes advantage of the festivities to head to Ed Walker and Edna Walker's junkyard, hoping to acquire some scrap he can use to improve his M.E.C. He winds up unintentionally coming to the aid of Jay when a revived Samukai kidnaps his parents in an effort to force Jay to surrender so Samukai can destroy him. Ronin rescues Jay's parents, enabling Jay to fight and defeat Samukai, and is then given a supply of scrap for his efforts, the Walkers informing him that "all [he] had to do was ask."

The Hands of Time

Ronin helps Misako move various supplies to the Temple of Airjitzu, with Dareth "supervising" the process. After Misako finds Nya's Samurai X armor, Ronin likes the idea of trying to sell it to a collector, while Dareth would like to relocate it to his dojo. As the two bicker, a temporal disruption caused by the return of Acronix advances time and finds Ronin standing on top of Dareth. Misako then notes that they have moved forward in time a full minute.

Dareth, having been robbed of his fake trophies, comes to Ronin's new shop to purchase a new set, only for the two to spot and battle a pair of Vermillion. They then travel to the temple to warn the ninja, and then accompany all of the Ninja but Lloyd and the absent Nya and Zane to face them in battle. Ronin employs his M.E.C. in the battle only to be defeated, and ends up with his leg broken after egging Dareth into attacking the Vermillion.

The new Samurai X briefly poses as Ronin to conceal their true identity from Nya, until Nya points out that Ronin's leg is broken.

Ronin appears at the ceremony commemorating the Ninja victory over the Oni. 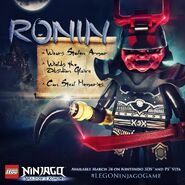 As seen in Shadow of Ronin

Ronin in his samurai disguise without helmet

Tied up by the ghosts

"Bomb voyage!"
―Ronin before dropping a bomb at the Ninja
"Congratulations, you beat my mech. That is good news. That bad news is, I have a plan B. In case you're wondering, the B stands for 'boiling you like an egg'. Buh, bye!"
―Ronin after escaping on Rexs
"I'll get a nice coin for you, Mr. Tincan."
―Before selling Zane to Master Chen
"Doesn't matter. Because one, you can't stop my plans now. And two, your powers aren't a match for this baby."
―Ronin to Jay
"Oh, hoho; take a last look around your world, Ninjas! Cherish these final hours of existences, because of my client? Oh, he's gonna take great delight in ending them!"
―Ronin after trapping the Ninja
"I've got an alternative source of power; power that I command; power that I will crush you with"
―Ronin in the LEGO Ninjago: Shadow of Ronin trailer
"If you're trying to appeal to my good side, then sorry; I can't afford one. What I do have, though, is a bunch of empty treasure chests I'm gonna to fill with riches."
―Ronin to Wu
"You might think they're drained, but the Forges still have plenty of spare power in them! Power that I command. Power, that bends to my will. Power...that I will crush you with!"
―Ronin while creating his mech
"Oh, you interfering, over-achieving, bleeding-heart, pain in the...ugh!"
―Ronin after his defeat