Rotta the Huttlet, also referred to as Rotta the Hutt or simply Rotta, is a minifigure based on the character from the Star Wars: The Clone Wars movie with the same name.

Rotta the Huttlet is sand green and has an oddly shaped body: His head and the main part of his body are in a vertical bulbous shape, with a hole for a stud underneath, while his tail is but a miniscule protrusion behind him. His two arms are short and are located on both sides of his head, which sports printing of two yellow eyes with black pupils. The mould features a flat nose and a long, thin mouth.

Rotta was the son of Jabba the Hutt. At some point during The Clone Wars, he was kidnapped by Asajj Ventress. He was later rescued by the Republic forces, led by Anakin Skywalker and Obi-Wan Kenobi. During the trip back to his father, he became very sick, but was taken care of by Ahsoka Tano, Anakin's apprentice. Ahsoka nicknamed him Stinky during this time. On the way back to Jabba's Palace, it was revealed that the Separatists had framed the Republic for capturing Rotta and were using clear "evidence" of the Republic's treachery to gain Jabba's support, which would allowing the Separatists make use of the Outer Rim territories Jabba controlled. The Jedi eventually foiled the plot and safely returned Rotta to his father. Jabba than granted the Republic access to his territory. 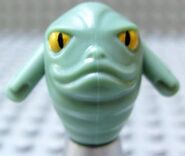 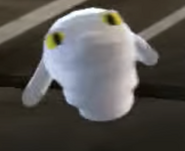