Brickipedia
Register
Don't have an account?
Sign In
Advertisement
in: Television episode only minifigures, Articles in need of expansion, Articles that need to be Brickified

You may be looking for the Ninjago: Masters of Spinjitzu episode of the same name.

The Royal Blacksmiths are a singing quartet from Ninjago: Masters of Spinjitzu led by Lou, Cole's father.

"Stop! If my ears weren't attached to my head, they'd be running away!"
―Lou to the Ninjas

Lou is Cole's father, and is an accomplished dancer, winning the Blade Cup multiple times, according to Cole. He belongs to the dance quartet, the Royal Blacksmiths

Lou is a dancer. He broke his leg, and carries a Cane around with him. He teaches the ninjas how to to do a special dance, but later finds out that Cole and the others were planning to steal the Blade Cup. Cole reveals to him that he is a ninja, and he gets very angry, and leaves the stage, however, he stayed and watched the ninjas do "The Spin Harmony". Afterwards, he goes back to Cole, only to be crushed by Studio equipment. Cole saved him and unlocked his true potential.

Lou and the Blacksmiths return in Ninjaball Run, where they have a car with a platform. The singers stand on the platform and present. However, the banner on the car caught on a twig in the Birch Wood Forest leg of the race, and they rammed into a snowbank.

Lou and the Royal Blacksmiths also appeared in Day of the Departed, in which their new manager Dareth books them to perform a concert on the titular holiday. Lou becomes concerned when Cole doesn't show up to spend the holiday with him as they had previously arranged, but ends up performing with his quartet anyway even after General Kozu attacks. He is later reunited with Cole and spends the holiday with him, the other ninja, and their families and friends.

Lou and his band also appeared in Pause and Effect, in which-having been mistaken for actual blacksmiths, they are shown to have been abducted by the Vermillion army. He is also mentioned in "The Jade Princess" during a flashback, in which it is revealed that dancing and singing are among his ways of mourning a loss that he and Cole both suffered prior to his son becoming a Ninja.

In "The Virtues of Spinjitzu", Cole thinks back on a time when he saw his father and mother dancing together happily. 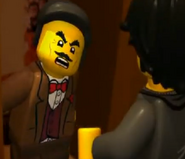 Cole's father yelling at him 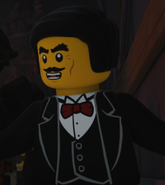