Rubeus Hagrid, known as "Hagrid", is a Harry Potter minifigure that stands a head higher than most minifigures. He was introduced in 2001, and has appeared with three different variations since. His hands are also different as they have fingers marked. Not counting accessories or hands/arms he only consists of 3 pieces. Body, head and hairpiece. His body design is similar to that of figures from the Jack Stone theme.

Professor Rubeus Hagrid (born December 6, 1928), the date of that particular school year is firmly established as being 1992-1993. It is also said that Hagrid was expelled 50 years prior to this (1943), during his third year at Hogwarts. A third year student is 13–14 years old making Hagrid's year of birth 1928. He is generally known by only his surname, "Hagrid." He was a half-giant, wizard, son of Mr. Hagrid and the giantess Fridwulfa, and elder half-brother of the giant Grawp. He attended Hogwarts School of Witchcraft and Wizardry in 1940 and was sorted into Gryffindor house. In Hagrid's third year, he was framed by Tom Riddle for the crime of opening the Chamber of Secrets and using his pet Acromantula to attack several Muggle-born students and eventually kill one of them. Though Hagrid's wand was snapped and he was expelled, he was trained as gamekeeper of Hogwarts and allowed to live on the school grounds at the request of Albus Dumbledore. In 1991, Hagrid was given the task of reintroducing Harry Potter to the wizarding world. In 1993, Hagrid would assume the post of Care of Magical Creatures professor after the retirement of Professor Silvanus Kettleburn.

As a member of both the original and re-instated Order of the Phoenix, Hagrid fought in several battles of the First and the Second Wizarding Wars, including the Battle of Hogwarts in 1998. By 2017, he was still living, and presumably still teaching and tending to his gamekeeping duties at Hogwarts.

In the Harry Potter video game, even though he had a first and second year education, he can only perform Wingardium Leviosa. It is possible that in the game, his umbrella can only perform very basic magic, as his old wand is concealed inside. In the game, he can create the potions and he carries a cross bow.

In the second Harry Potter video game, he remains the same: an umbrella which has Windgardium Leviosa. He also has "strength," which can be used to pull levers. Like last game, he carries a crossbow. 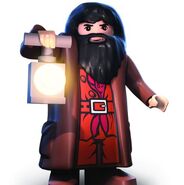 Hagrid as he appears in LEGO Harry Potter: Years 1-4 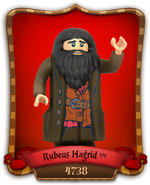 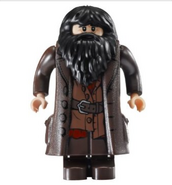