Rufus McCallister, better known as "Mother Doomsday", is the owner of the "Ninjago Doomsday Comix" shop.

In the cartoon he has the same hair as Padme Amidala from The Clone Wars, a goatee, and an orange t-shirt with red linings. His design for The LEGO Ninjago Movie features a similar design but with a Galidor T-Shirt.

When the ninja were accidentally turned into children and being hunted by the Grundal, Lloyd decided to ask Mother Doomsday for help defeating it. Although he thought they were only talking to him about a theoretical situation, he gave them information about the Grundal's strengths and weaknesses. When mentioning that a Grundal could perhaps be defeated with the illuma-swords, he then told the ninja they could have them if they won the upcoming trivia contest hosted by him, in which the swords were the prize. He was in the store when the Grundal attacked, and he and the other children were trapped until Sensei Wu and Nya came and helped them while delivering the tea the ninjas needed to turn the clock forwards and grow older again. After the Grundal was defeated, he offered Lloyd a comic book of Star Fared, saying he earned it, but Lloyd said he already knew how it ended. Rufus also appeared in The Day Ninjago Stood Still being chased out of his shop by a Stone Warrior and tried to fight him with a toy sword but ran out again holding his comics. 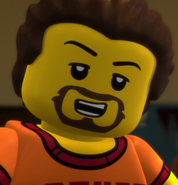