S.W.A.T. are special high-end police officers used in dangerous situations. All use shotguns, which fire three bullets, making them dangerous foes. They have appeared in LEGO Batman: The Videogame. They are enemies during the villain's mission. He returns in LEGO Batman 3: Beyond Gotham as a DLC character.

SWAT on consoles and PSP. 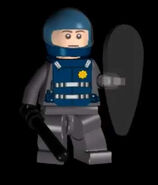