The SDCC Star Wars Brickmaster Exclusive 2009 is a MINI set of a Republic Dropship and AT-TE. It was released on July 22, 2009 at the San Diego Comic-Con 2009. The set is sponsored by Brickmaster and only 500 of these sets are to be made. 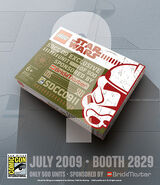 Retrieved from "https://brickipedia.fandom.com/wiki/SDCC_Star_Wars_Brickmaster_Exclusive_2009?oldid=1649961"
Community content is available under CC-BY-SA unless otherwise noted.