Sabine Wren is a Star Wars Rebels minifigure released in 2015.

Sabine Wren, codenamed Spectre-5, was a sixteen-year-old Mandalorian rebel who operated as the weapons expert for the Ghost crew. A former Imperial cadet at the Academy on Mandalore, she joined the rebels after her family became negatively affected by the Empire. Sabine was also a skilled graffiti artist who often tagged where the Ghost crew had attacked with a phoenix symbol and an explosive paint bomb. She also has the tendency to recolor her armor and hair.

As the second-youngest of the Ghost crew, Sabine shared a family-like relationship with the rebels. She looks up to Hera and Kanan, seeing Hera as a mentor-figure, and thinks of Zeb and Ezra as friends while ignoring Ezra's awkward attraction to her, though she does occasionally acknowledge his praise.

In the third season of Rebels, Sabine adds considerably to her arsenal with a Jetpack, weapons gauntlets, and the Darksaber. The latter weapon she obtained after it was abandoned by Maul, who previously took it from Pre Vizsla; after taking possession of it she would set out to help her people throw off the Imperial occupation of Mandalore. In the fourth season she would succeed in rallying her people against the Empire, before taking part in the liberation of Lothal. Several years later, following the death of Sheev Palpatine, she would join Ahsoka Tano in a mission to locate the missing Ezra.

Sabine's first minifigure has Earth Blue hair with some highlights of Flame Yellowish Orange. She has a Light Nougat two-sided head with a smirking expression and an angry expression. Her torso is Medium Stone Grey with Light Stone Grey lines, along with Dark Red Mandalorian armor plates with Bright Orange and Metalized Silver detailing. Her arms are Light Nougat and her hands are black. Her legs are Brick Yellow, with a Reddish Brown belt and Dark Red kneepads printed on. She carries two black blaster pistols.

Sabine Wren's second side of her head.

Sabine Wren's front and back print. 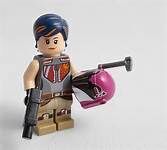 Sabine with her pink helmet. 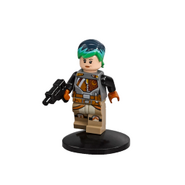 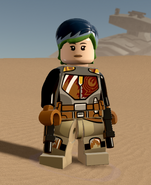