This article is about the Minifigures character. For other uses, see Sailor (Disambiguation).

The Sailor is a Minifigure that was released in 2011 as a part of 8804 Minifigures Series 4. He wears a sailor cap with an anchor on it (which is a new mould), a sailor uniform, and plain white pants. His face has its right eye open and its left eye shut to look in the telescope.

The Sailor has totally white clothes, apart from a dark blue printed scarf on his top, both on the front and back. His hat, which is an exclusive piece, has a dark blue anchor at the front. His face has its right eye open and its left eye shut to look in the telescope. His single accessory is a silver telescope. 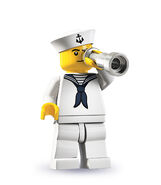 Deutsch Français
Community content is available under CC-BY-SA unless otherwise noted.
... more about "Sailor (Minifigures)"
RDF feed
Accessories
Silver Telescope +
Appearances
8804 Minifigures Series 4 +
ArticleRating
2 +
Image
col058.jpg +
InfoboxTemplate
Minifigure +
ShopDescription
“Aye aye, Cap’n!”
The brave an … “Aye aye, Cap’n!”<br />The brave and trusty Sailor can always be counted on in a nautical emergency. He can tie knots like nobody’s business, spot a lighthouse through his spyglass from a hundred leagues’ distance in the middle of a storm, and hoist a mainsail or batten down the hatches in no time flat.The Sailor has spent his whole life at sea, and he knows every tide and fathom like the back of his hand. He just doesn’t feel like himself if he’s not out on a sailing ship, feeling the deck roll beneath his feet and hearing the gulls squawking overhead. Freedom, adventure and the great wide sea: that’s the life for him!e great wide sea: that’s the life for him! +
Theme
Minifigures
Series 4 +
Title
Sailor +
Years
2011 +
Advertisement