Brickipedia
Register
Don't have an account?
Sign In
Advertisement
in: Class 3 articles, Ninjago Minifigures, Minifigures introduced in 2011,
and 2 more
English

"You're powerful, Garmadon, but don't forget who rules this place with four iron fists."
―Samukai [src]

Nunchucks of Lightning, Scythe of Quakes, Shurikens of Ice

Samukai is a Ninjago minifigure released in 2011. He was one of the first four armed minifigures to ever be released. According to the Ninjago Website, he is the King of the Underworld and Skulkin general of fire, until Lord Garmadon arrived in the Underworld and defeated him in a duel, thus Garmadon became the new King and relegated Samukai into being a servant of his, though Samukai remains general of the Skeleton army. He is the secondary antagonist of the pilot episodes of Ninjago: Masters of Spinjitzu.

Samukai had four arms and a large head. He also had two scars above his eyes, and wore the standard chest plate of a fire-based General of the Skeleton Army. In the mini-movie An Underworldly Takeover, he wore the helmet Lord Garmadon wore in 2011, so it seems that the helmet is the helmet of the leader of the Underworld.

In LEGO Battles: Ninjago, Samukai appears with many of the other skulkin. He appears in many of the game's cutscenes. Most of these are from the Skulkin story. They are as follows:

According to the Ninjago Official Guide, Wu and Garmadon defeated Samukai before Garmadon turned evil. When Garmadon was banished to the Underworld, Samukai attempted to kill him, but was himself defeated and deposed, though he remained Garmadon's general. Before he started attacking Ninjago, Samukai looked up Zane's father, Dr. Julien, and revived him with a potion. Samukai forced him to build powerful vehicles that would aid him with his attack, and when he refused, he was locked in a deserted lighthouse in the middle of the sea. Years later, he lead an assault on the Four Weapons Blacksmith shop to find the map to the four Golden Weapons. He fought Kai one on one for a small amount of time before subduing him, but before he could finish him off, Sensei Wu intervened. Samukai then used his daggers to make a large water tower begin to fall on Kai, leaving Sensei Wu with a choice: Rescue Kai, or capture Samukai. Samukai used the distraction to capture Nya, and escape in his Skull Truck. He and his army stole the map from Kai and Nya's shop that leads to the four weapons. The ninjas, Cole, Jay, Zane, and Kai, later steal the map back.

He then went to find the first Golden Weapon, the Scythe of Quakes, hidden in the Caves of Despair. However, Nuckal read the map upside down, and was digging in the wrong place. After the four Ninja accidentally gave away their presence, he took his army in to fight them and claim the Golden Weapon. Soon after the Ninja discovered Spinjitzu during the battle, he called a retreat, as he could not fight four Spinjitzu masters and the Earth Dragon appeared. Garmadon then gave Samukai new orders: Let the Ninja think they're winning. Samukai continued to seek the Golden Weapons, but allowed the Ninja to dominate until just before they began to search for the Sword of Fire. Then, Garmadon's scheme came into play. Kai was lured away from the rest of the group, and Sensei Wu followed. Samukai and his army then ambushed Jay, Zane and Cole, claiming the Shurikens of Ice, the Scythe of Quakes, and the Nunchucks of Lightning for Garmadon.

Garmadon then sent him back to the Underworld, where he fought Sensei Wu, who was wielding the Sword of Fire. Samukai defeated him, and took up the Sword, intending to use the Four Weapons and their power to defeat Garmadon and regain control of the Underworld. However, the power of the Four Weapons united was too much for anyone to handle, and as a result, Samukai disintegrates and The Portal through space and time appears, which was Garmadon's true plan all along. Having succeeded in his plan, Garmadon then escapes through the Portal vowing to return with more power so that he can wield the Four Weapons and recreate Ninjago in his own image.

Samukai is one of the villains revived by Sensei Yang during Day of the Departed. He, alongside two Skulkin warriors, attacks Jay at his parents' junkyard, but Jay is helped by Ronin, who had come with plans of stealing the place.

An overall view of Samukai 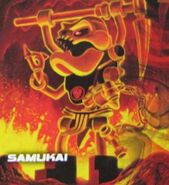 On the Spring 2011 catalog mistakes were made on the naming of minifigures. Samukai and Chopov also had their torsos switched. 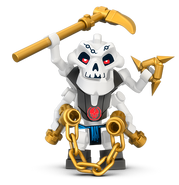 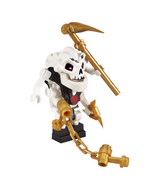