"A sword is only as strong as the heart that wields it."
―Samurai Warrior

Samurai Warrior is a minifigure released as part of 8803 Minifigures Series 3. He is constructed out of five pieces: helmet, head, armor, torso, and legs, and comes with a sword and base.

The Samurai Warrior has a dark red torso, dark red arms, dark red legs, a dark red waist, and black gloves. The torso and legs are printed with flower designs to give it the appearance of a kimono. This printing is largely covered by the armour that the samurai wears over his torso. The samurai also has a yellow head with printed facial features. He has black eyes with white pupils, a serious expression, thick black eyebrows, and a black beard and mustache. He wears a grey samurai helmet, and wields a grey katana. 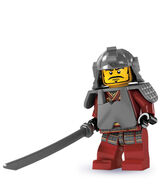