This article is about the minifigure. For other uses of the term, see Santa Claus (disambiguation).

Santa Claus or Saint Nicholas is a festive Minifigure bringing Christmas cheer to other Minifigures. Santa Claus is available in many Holiday LEGO sets. It is also available with grey legs. Another Minifigure variation of Santa has glasses which appeared in the 7687 City Advent Calendar. Still one more variation of Santa is nearly-nude in the shower included with 2824 City Advent Calendar. This minifigure appears in many sets and video games for comical purposes. 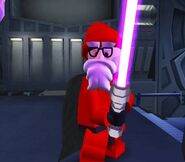 From LEGO Star Wars II: The Original Trilogy.
Add a photo to this gallery