Sir Santis is a minifigure from Knights' Kingdom II. His animal representation is the bear. He was originally known simply as Santis, but was knighted after his actions toward defeating Lord Vladek.

Santis' first variant has an unprinted red torso underneath an armour piece of the same colour. The armor has printing of sand blue designs on it. The design running down the center of the armor piece is reminiscent of his action figure version's sword. Surrounding that are four splashes of sand blue shaped like spikes. The arms of Santis are red and the hands dark grey, the same color as his hips. Santis' legs are unprinted and bright red.

His helmet is red as well, as is his visor. The visor is a robust, almost square shape, with a single horizontal slit for the eyes. Santis' head is yellow, like most unlicensed minifigures, and bear printing of thick black hair that covers the forehead, temples and cheeks and forms into a beard and mustache. His mouth is wide and turns up at the corners. Santis' eyebrows are bushy and drawn down over his eyes, which are black with white reflections. The mouth coupled with the angle of the eyebrows give an expression of a fierce, slightly confident grin.

This variant is very similar to that of 2004, with the differences coming in the printing on the armor and color of the hands and hips, both of which are nougat. The armor printing is of the golden head of a bear, with the mouth open and teeth visible in a roar and the ears touching the shoulders of the armor.

The second variant released in 2005 is almost identical to the first one. His hands, however, are sand blue. The bear face is outlined in the same color on this variant.

Santis was a knight of the kingdom of Morcia, from the province of Orkosan. He was the knight of the bear and was renowned for his great strength. When King Mathias disappeared mysteriously and his adviser, Vladek, took his place, Santis was suspicious. He teamed up with three other knights, Rascus, Jayko and Danju, to discover the truth behind the king's disappearance. They soon discovered the truth: that Vladek had captured the king and was trying to make himself Morcia's ruler. Through the knights efforts, Vladek was defeated and jailed. Santis and the other three knights were knighted and given medals by the newly reinstated King Mathias. Soon after, however, Vladek escaped. He fled to the Lost Kingdom of Ankoria, where he amassed an army of his Shadow Knights and build a fortress to protect his Vlad-mask, that which would make him invincible were it completed. Santis and Rascus managed to sneak inside the fortress and lower its drawbridge, allowing Mathias' forces to launch a full scale assault. The Vlad-mask was destroyed and Vladek defeated once again, this time for many, many years to come. 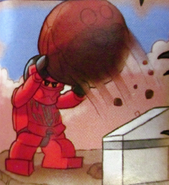 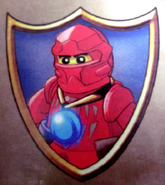