In At World's End, he arranges a deal with Captain Barbossa and the crew of the Black Pearl to rescue Jack Sparrow from Davy Jones' Locker. He later betrays them and hands them to Lord Cutler Beckett. However Beckett betrays him in turn and Sao Feng sides with the pirates of the Brethren Court. He dies when he is impaled by a piece of wood when his ship, the Empress, is attacked by the Flying Dutchman. He believes Elizabeth Swann is Calypso. 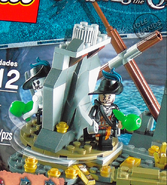 Jack and Barbossa dueling in LEGO Pirates of the Carribean: The Video Game for Nintendo 3DS.
Hecterbarbosa.png
Add a photo to this gallery
Retrieved from "https://brickipedia.fandom.com/wiki/Sao_Feng?oldid=506209"
Community content is available under CC-BY-SA unless otherwise noted.