In At World's End, he arranges a deal with Will Turner to trade the black pearl for the freedom of Will's father. By doing so Will tricks Captain Barbossa and the crew of the Black Pearl into thinking that Sao Feng is on their side in their plan to rescue Jack Sparrow from Davy Jones' Locker by supplying them with Sao Feng's Charts, a ship, and a crew. When the crew of the Black Pearl return from Davy Jones' Locker, Sao Feng betrays them and hands them to Lord Cutler Beckett. However Beckett betrays Sao Feng. Sao Feng sides with the pirates of the Brethren Court when Barbossa tells them that they have the sea Goddess Calypso on their side. Sao Feng assumes that Barbossa means Elizabeth Swan, and tells them that he will align himself with them if Elizabeth joins him on his ship, the Empress. Barbossa agrees, and after attacking the HMS Interceptor to buy them time, the Black Pearl and the Empress split up on their way to Shipwreck Cove to meet with the Brethren Court. Lord Cutler Beckett orders Davy Jones to follow the Empress while he follows the Black Pearl. While on the Empress, Sao Feng treats Elizabeth like the Goddess he believes her to be. After explaining to her that it was the first Brethren Court that bound her in human form, Sao Feng tells her that he would have tried to prevent this from happening. Sao Feng then attempts to kiss Elizabeth, but she bites him and pushes him away. Suddenly, the Flying Dutchmen strikes the Empress, sending a massive piece of wood into Sao Feng's body. Sao Fend pulls Elizabeth close and gives her his piece of eight, making her the captain of the Empress,and one of the nine pirate lords. Sao Feng brings Elizabeth closer still and with his dieing breath whispers "Forgive me, Calypso" into Elizabeth's ear. 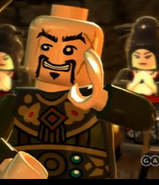 Hector Barbossa & Sao Feng
Add a photo to this gallery
Retrieved from "https://brickipedia.fandom.com/wiki/Sao_Feng?oldid=506617"
Community content is available under CC-BY-SA unless otherwise noted.