The Sarlacc is a creature in the Classic Star Wars theme. The Sarlacc was released in 2006 and 2012.

The Sarlacc's mouth is laced with sharp teeth and conceals a smaller, clam-like head surrounded by tentacles. It is mostly made up out of tan and brown bricks, with white teeth. In the 2012 variant it has a bigger mouth (by height) and holds enough room for two mini figures.

The Sarlacc was a monstrous creature that lived in the Great Pit of Carkoon on Tatooine. Jabba the Hutt brought Luke Skywalker and Han Solo to it in order to execute them, but his plans failed and several of his own henchmen were eaten instead, including Boba Fett. Later, Boba Fett escaped with help from his still semi-functional jetpack. According to C-3PO, the Sarlacc took 1,000 years to digest its food. 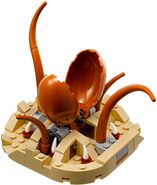