Saruman was at first the powerful and wise leader of the five Istari, or wizards, in Middle-earth, and leader of the White Council. When Gandalf the Grey began suspecting that the Necromancer of Dol Guldur was none other than Sauron, the White Wizard opposed the idea as well as the Quest for the Lonely Mountain. When his comrade was captured however, Saruman, Galadriel and Elrond attacked Dol Guldur to both rescue Gandalf and drive the Necromancer out. The attack confirmed the Wise' fears of Sauron's return, but Saruman assured them that he would find a way to deal with the threat. With the approval of Beren Steward of Gondor, he settled in Isengard and began using it's vast library to study the devices of the Enemy and look through the palantir located in the Tower of Orthanc. His continued use of the Seeing Stone led to him being ensnared by Sauron and he grew into a manipulative man, scheming to earn his new master's favor and to rule Middle-earth. In preparation for the War of the Ring, he compelled orcs from the Misty Mountains into his service and used to labour in Isengard, while also secretly breeding some with goblin-men to make Uruk-hai. When Gandalf the Grey came seeking his counsel, Saruman revealed his allegiance to Sauron and imprisoned his old friend in Orthanc for refusing to "aid him willingly". Following Gandalf's escape, the fallen wizard had a the first batch of Uruk-hai be sent to capture the hobbits carrying the One Ring (though the scouts accidentally captured Merry and Pippin instead). Saruman continued to speak with Sauron through the palantir, assuring him that together they would rule Middle-earth. As part of his plan to destroy the kingdom of Rohan, he persuaded the wild hill-men from Dunland to join his master's side and sent bands of orcs to burn the villages of the Rohirrim and cut down trees from Fangorn Forest for fuel, earning the ire of both Prince Eomer and the Ent chief Treebeard. In a short time, Saruman had amassed an army of 10.000 Uruk-hai as Sauron had commanded him. Following his failure to completely possess King Theoden and weaken Rohan, the wizard unleashed his forces against him. The Battle of Helm's Deep ended with the defeat of the Uruk-hai legions and the Ents led by Treebeard used the fact that Isengard was guarded only by the orc labourers to besiege the ringed fortress, resulting in the total annihilation of Saruman's army. With his power shattered, the traitor hid himself within Orthanc, a prisoner in his own tower. Gandalf, Theoden, Aragorn, Eomer, Gimli, Legolas, Pippin, Merry and Treebeard later confronted him and demanded that he yield information on Sauron's plans and offered to spare him should he come down. Saruman remained at the top of Orthanc and unwilling to give up information, due to his unwavering allegiance to Sauron and descent into evil. After he mocks them all and even beats his agent-turned slave Gríma Wormtongue, the latter takes out a dagger and stabs the wizard in the back several times. Saruman's body falls from the top of Orthanc and into the spiked wheel below, which slowly rotates, sending him to a watery "tomb".

Saruman's fate varies between versions of The Lord of the Rings; in the novels, after Sauron was destroyed, Saruman persuaded Treebeard to free him from Orthanc, and he left with Gríma Wormtongue (who he treated very badly due to his betrayal). Saruman then went to the Shire and took over it with the help of bands of orcs, half-orcs and ruffians, and was finally killed in the Battle of Bywater when he was mistreating Gríma, who then slit his throat. His death ended the War of the Ring right in front of Bag End, the very place Frodo first stepped out of. Two different fates for Saruman were featured in Peter Jackson's film trilogy; in the theatrical version he is last spoken of as being imprisoned within Orthanc. In the extended edition, he is stabbed by Wormtongue at Orthanc and then falls to his death.

Peter Jackson's film adaptation of The Hobbit incorporated historical information from The Lord of the Rings and featured Saruman in his role as a member of the White Council who discounts the possibility of Sauron returning as the Necromancer of Dol Guldur. Despite this, he later comes to Dol Guldur along with Elrond and Galadriel and battles the Ringwraiths prior to Sauron's exile. The films also differ from the novels in depicting Saruman as being wholly loyal and devoted to Sauron, as opposed to allying with him while planning to betray him at a later date. While it can still be interpreted that the wizard's move to send Lurtz to capture the hobbits was to gain the Ring for himself in the first film, in the novels it is made clear that should he gain it he will try to supplant Sauron and he even goes to as far as lying to the Ringwraiths about not being aware of the Shire's location and misleading other agents of the Dark Lord found in Eriador.

Saruman's role in the games is identical to his role in the films, though the events of the film The Battle of Five Armies are omitted. When Isengard is flooded and his army is defeated, he becomes angry and throws the palantir out of the balcony and into Pippin's hands.

Saruman appears in Lego Dimensions, as a henchman of Sauron, who has allied himself with Lord Vortech. He first appears together with the Joker and Vortech himself, who mocks him by calling out Sauron's name (Saruman, who claims he is not a "bad guy", bows expecting his master to stand behind him but realizes the pun, making the Joker laugh). Vortech later sends him to harass Gandalf, Batman and Wyldstyle in the Ninjago: Masters of Spinjitzu world. Riding the Anacondrai Serpent and wielding the power of the elemental Keystone, he battles against the player, boasting to Gandalf on Sauron's ultimate victory, but both he ans his mount are eventually defeated.

Painting in 10237 The Tower of Orthanc

Front and Back Printing 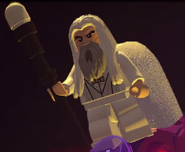