Satipo was one of Indiana Jones's guides in a Peruvian jungle. He has appeared in only one Indiana Jones set, which was 7623 Temple Escape.

Satipo was Indy's guide in South America to find the lost temple. However, when they found the site, the temple began collapsing after Indy took an idol. Satipo betrayed Jones and attempted to escape with the idol. His bloodied corpse was found impaled to the wall, after he was killed by a spear trap in the temple. After recovering from the shock of seeing his guide dead, Indy grabbed the idol and escaped the temple. It is unknown what happened to Satipo's body afterward, but it presumably became one of the skeletons along with the other archeologist's body Indy found upon entering the temple. 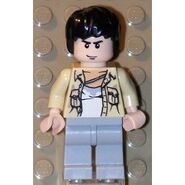 Indiana Jones and Satipo in The Lost Temple

Indiana Jones and Satipo inside of the Lost Temple