Brickipedia
Register
Don't have an account?
Sign In
Advertisement
in: Class 4 articles, The Lord of The Rings minifigures, Minifigures introduced in 2012,
and 4 more

Sauron, also referred to as the Necromancer of Dol Guldur, the Enemy or the Dark Lord, is a minifigure based on the main character of the same name in The Lord of the Rings and The Hobbit. He first featured in LEGO The Lord of the Rings: The Video Game and made his physical appearance in 79014 Dol Guldur Battle.

Sauron appears in LEGO Dimensions where he is voiced by Steven Blum. He was also a minor character in The LEGO Batman Movie, voiced by Jemaine Clement.

The Lord of the Rings/The Hobbit

Mairon - meaning "the Admirable"- was in his origin one of the mightiest Maiar (if not the mightiest) and the august among the Vala Aulë the Smith's folk. His virtue was his ardent love for order and his distaste of waste, as well as the cause of his downfall for in his impatience to affect his designs for the world his lust for the power to see his honorable designs through became the end in itself. Perceiving the means he required could be learned only from the upstart Melkor, he became his greatest ally and servant, following him in rebellion against their creator in Middle-earth.

In the days of the First Age, Sauron - meaning "the Abhorred" - was the most-trusted lieutenant of the Prime Dark Lord, Morgoth, and had a part in all the cunning evil works he wrought. He governed the fortress of Angband, organized the blacks armies at his master's disposal and commanded the war against the Elves in his absence. His defeat during the fabled Quest for the Silmaril persuaded him to flee into hiding to evade Morgoth's contempt, therefore he escaped the disaster of the latter's downfall in the War of Wrath. Sauron came out then and pleaded to Eönwë for the victors' forgiveness. Out of pride only, he refused to heed the advice to appear before the Valar in Valinor and face their judgement, remaining in Middle-earth.

Falling back to his old ways, Sauron rose as the Second Dark Lord in the black barren land called Mordor, over time assembling under his government all the foul things of Morgoth's time (possibly Balrogs and Dragons among them) and turning the warlike savage Easterling and Haradrim confederacies into fearless worshippers. It was in his domain of Mordor that he constructed the Tower of Barad-dûr, from where he conceivex his heinous plots to become the self-stylized "Lord of the Earth"; thinking that both Morgoth and the other Valar had failed, Sauron deemed himself the only worthy Ruler and honestly believed he was reshaping the world into his vision for the better.

Under the guise of Annatar - "the Lord of Gifts" - ventured into the western lands of Middle-earth. Seeming to the eyes of many as one both wise and fair, he taught the skilled Elven smiths many crafts, including the art of ring-making. Together they made many artefacts, heirlooms, magic rings and at last they forged nineteen Rings of Power:

Three Rings for the Elven-kings under the sky,

Seven for the Dwarf-lords in their halls of stone,

Sauron had deceived them, for wishing to be sole master over all other rational wills he had fashioned the One Ring for himself to wear. But when he put it upon his black hand, the Elves perceived the depth of his treachery and refused to either be his vassals or submit the lesser Rings of Power; the Dwarves proved hard to tame, yet the gifts they had received embittered them and their treasuries were plundered by greedy Dragons, while Men succumbed to his will as the deadlyRingwraiths. The Dark Lord then marshalled all the strength of his armies against the Elven realms: reducing Eregion to scattered ruins , occupying the Dwarf-hold of Gundabad and conquering all of Middle-earth but for Gil-galad's kingdom. Unable to break the Númenóreans through sheer force, he corrupted them and brought about both the sinking of their island Númenor and the decline of their civilization.

In that hour he bestowed upon himself the pretentious titles of "Lord of the World" and "King of Kings". However, a Last Alliance of Elves and Men led by High-Kings Elendil and Gil-galad pushed back their fores to the slopes of Mt. Doom, where they fought for the freedom of Middle-earth. Then Sauron himself came forth, killing Gil-galad and Elendil, at the cost of being severely weakened. Elendil's son, Isildur, saw the chance and cut off the One Ring from the Dark Lord's black hand with the broken shards of Narsil. Diminished, Sauron's spirit retreated into the East, though to the others it seemed as if the Enemy had at last perished. The Ring betrayed Isildur and was lost in the Anduin river for 2,461 years.

Recovering over the centuries, the Shadow of the Enemy takes shape once more and he settles in the fortress atop Amon Lanc. As the Necromancer of Dol Guldur, Sauron stirs all evil across the corners of Middle-earth and renews their hatred for the Free Peoples: the Orc tribes war with Dwarves and Men alike, the Dragons descend upon the rich mansions of the Grey Mountains and the Witch-King moves his kingdom of Angmar to fracture the realm of Arnor. Further in spite of the Watchful Peace that withers aways, Smaug the Terrible sacks Erebor, lays on the pile of gold within and drives the Dwarves out. Only Lothlórien, Rivendell, Rohan and Gondor still stand in the way of the Dark Lord's absolute dominion and as ever, what Sauron cannot twist to his purposes he destroys.

The wizard Gandalf is able to deduce there is one puppet master pulling the strings behind the recent events, suspecting that the ancient Enemy of Middle-earth has returned and that he could use the Dragon Smaug to devastating effect. Gandalf sets on a quest with Thorin Oakenshield's company to reclaim the Lonely Mountain, end the fire-drake's reign of terror and discover the truth about the mysterious Necromancer. Ultimately, Smaug is slain and the immeasurable number of Gundabad Orcs is decreased in the Battle of Five Armies, limiting Sauron's growing potential in the northern territories. When the White Council attacks Dol Guldur, the Dark Lord goes into the East on his own intent, but not before a display of sheer malice and inherent strength in a confrontation with Lady Galadriel.

Not long after, Sauron resurfaces in Mordor to finish the preparations for the upcoming war. The wizard Saruman becomes a traitor to the White Council, shaken by the revelation of the Enemy's force, envious of Gandalf and yearning for greater power. Sauron ensnares his former opponent through the Palantir and turns him into a valuable servant - yet also faithless . Openly declaring himself, the Dark Lord unleashes his armies in the War of the Ring, maneuvering them through deputies such as Saruman or the Witch-King against his adversaries, while still searching for the One Ring. Even with losses suffered, it is clear that Sauron is nearing triumph. However, in the last moment the Ring is cast into the fires of whence it came and the Enemy is defeated: bereft of bodily shape and rendered much impotent, Sauron follows a fate similar to his old master's, Morgoth, stepping into banishment to the Timeless Void.

The Dark Lord Sauron is one of the villains rallied by Lord Vortech to conquer the multiverse, bringing his servants from Middle-earth - most notably myriads of his Orc footsoldiers and the turncoat wizard Saruman - to contribute the cause. Through he is in league with Vortech, Sauron ultimately uses the villainous alliance to serve his own ends (probably the expansion of his empire to other worlds).

Sauron travels over to the city of Metropolis alongside Two-Face through one of Vortech's portals, retrieving the Keystone and morphing Metropolis into a Mordor-like state, complete with his army of orcs and the Tower of Barad-dur. Batman, Wyldstyle, and Gandalf arrived on the scene not soon after, taking down Sauron's hordes and Two-Face as they approached the Tower. They eventually reached Sauron himself, who had the keystone perched on his throne. Angered by their interference, Sauron used the power of the keystone to summon a Dalek ship, with several Daleks emerging from within and causing objects from other realities like Gandalf's fireworks cart and Batman's bat-signal to arrive from various portals. Eventually, the trio defeated Sauron, as his power was not as absolute as it was in Middle-earth, causing Barad-dur and the rest of his creations to collapse and for Sauron himself to suddenly compress into a cube before being sent back to Vortech's lair. The Dark Lord is mocked for his failure by his ally and leaves, proving himself a sore loser when it comes to accepting his defeat.

During the film after The Joker having been emotionally hurt by Batman's insistence that he was not his archenemy, he is seen depressedly watching a news report of Superman who had recently banished General Zod to the Phantom Zone which contains some of the most evil villains in pop culture, chief among them was the Eye of Sauron, King Kong, Lord Voldemort, the Wicked Witch of the West and her Flying Monkeys, the Daleks, the Kraken, Agent Smith, the Vampire, the Mummy, the Swamp Creature, The Great White Shark from Jaws, the Skeletons from Jason and the Argonauts, and the Tyrannosaurus rex and Velociraptors from Dino. It is here when Joker concocts his greatest plan to free the villains from the Phantom Zone and conquer Gotham. When Joker is sent to the Phantom Zone, he is greeted by the various villains. The Eye of Sauron is the first to greet him by commenting he is the new guy, all the other villains first impression is to kill him but Joker quickly states that he plans to set them all free if they help him to destroy Batman and rule Gotham City.

The heroes decide that they cannot get to Wayne manor to stop the Joker with the Eye of Sauron watching them and so the heroes make a plan to take Eye of Sauron out, using master build they create the Batwing and manage to get the attention of the Kraken who fires an energy blast at the Batwing but he misses and hits the Eye of Sauron instead, making him the only villain to die in the film. The other villains are horrified by this and the Joker cries out "SAURON!!!!" in anguish as he mourns his dead friend, while the Kraken who is equally shocked by what he did, quietly slips away stating "nothing to see here."

The Eye of Sauron

Sauron as a minifigure 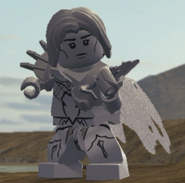 Sauron viewing through the Palantír

Sauron of the First Age

Sauron in his Boss form