Brickipedia
Register
Don't have an account?
Sign In
Advertisement
in: Class 2 articles, Minifigures introduced in 2013, Minifigures (theme),
and 2 more
English

This article is about the Collectible minifigure. For the Batman minifigure, see The Scarecrow.

Scarecrow is a Minifigures Series 11 minifigure released on September 1, 2013.

The Scarecrow has a brown hat with an orange patch, a tan strap all around it and a hole on the top that fits a black crow. The Scarecrow's head is tan with a smiling face and brown eyes made out of buttons. Its mouth and brows are made of black string. Its body is mainly dark tan and has hay coming out of several spots, such as the neck and shirt. There are two patches on the body: one brown, on the back, and one green, on the front. The plaid dark tan shirt which the Scarecrow wears has a small pocket on one side which has a single piece of wheat showing. There is a tan strap around its waist which is tied on one side and is continued on the legs. The Scarecrow's arms are dark tan with printed crosses and a brown patch on one arm. Its hands are tan. The Scarecrow's legs are light blue with a continuation of the shirt on the hips and the top of the legs themselves. There is one patch on one of the legs and two patches on the other one. The Scarecrow also carries a brown pitchfork.

Scarecrows are usually made of old clothes filled up with hay in the shape of a human. They are put on fields to scare birds such as crows or sparrows away. There are many different kinds of scarecrows all over the world. 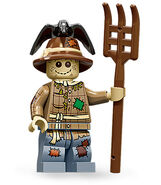