Scolder is a Legends of Chima minifigure released in 2014. He is part of the Scorpion Tribe. 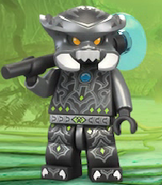