This article is about the animal. For other uses, see Scorpion (Disambiguation).

The Scorpion, also called Lobster and Desert Creature, is an animal minifigure that appears in many sets in six different colors (Black, Dark Grey, Red, Trans-Neon Green, Trans-Neon Orange and Pearl Gold). The piece has a tube on the bottom and a stud on central sectoin. Its physical features include two pincers and a stinger in an upward position. There is a bigger version of a scorpion in 8076 Deep Sea Striker and in 7327 Pyramid of the Pharaoh. 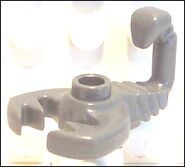 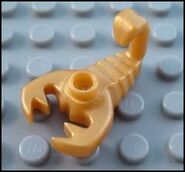 A scorpion in the Build mode in LEGO Racers
Add a photo to this gallery
view · talk · edit Animals
Retrieved from "https://brickipedia.fandom.com/wiki/Scorpion?oldid=1837249"
Community content is available under CC-BY-SA unless otherwise noted.