A Scout Trooper, also known as a Biker Scout, is a minifigure from the Star Wars theme.

The first edition Scout Troopers had a yellow head with black goggles. Newer versions come with a black head like the two in 8038 The Battle of Endor. They have white legs with a black joint. The torso is white with white arms and black gloves. Their torso markings show chest armour and two pouches, one on each side of the belt. The 2012 variation has the same pieces, but the head now has a face like the 2012 Stormtrooper; a pale face printed on a black head piece.

The 2013 variation, introduced in 75023 Star Wars Advent Calendar, features a head similar to the 2012 variation and uses the same helmet as the previous variations. It has black legs and arms, representing the scout's jumpsuit worn under their white armor. Armored kneepads are printed on the black legs. A white waist and represents the scout's belt. Like the first variation, it also has a white torso with markings displaying chest armor and pouches, but the overall appearance of the armor is quite different. This variation has black arms representing the jumpsuit and black hands representing the black gloves they wear.

Scout Troopers appeared in both LEGO Star Wars II: The Original Trilogy and LEGO Star Wars: The Complete Saga. They carried blasters and had the same abilities as normal blaster characters; fire, grapple hook, and build. They could also unlock Imperial panels.

The Scout Trooper, or Biker Scout, is a Stormtrooper variant. Scout Troopers were used for scouting base perimeters and keeping track of enemy troop movements. They were also trained as marksmen, using sniper rifles and blaster pistols. Many were also outfitted with Z4-Z speeder bikes for scouting patrols. They were equipped and trained to be able to survive for weeks on their own without any support.

They often worked in teams of two, called "lances", led by a sergeant. When the Second Death Star was being constructed in orbit of the forest moon of Endor, a bunker was built containing a generator creating a force field around the battle station. Scout troopers were used to patrol the bunker's perimeter, and later took part in the battle that followed against Rebel forces.

Scout Troopers were typically seen as a specialized vehicle force, rarely seen patrolling the streets of populated imperial cities, as that duty would typically fall under the job of a Patrol Trooper, another stormtrooper variant. Scout Troopers instead could be mainly seen providing security to restricted imperial bases that the general public had no access to, or called in to deal with hectic or urgent situations regarding vehicles that other imperials wouldn't have the skills or firepower to deal with. It should also be noted that some variations of Scout Troopers wield an electro-staff and patrolled bases regularly as an extra security force. 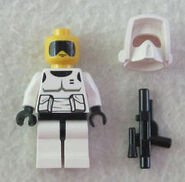 Under the original variants mask 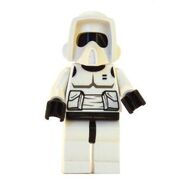 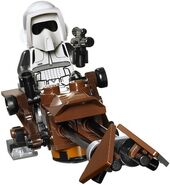 The Scout on a speeder