Scrug is a character in Legends of Chima. He is Scutter's brother.

He appears in The Legend Thief with his king Scorm and brother Scutter helping create a statue dedicated to the Great Scorpion and later he is being lifted up and defeated by the Raven Legend Beast.

He then appears in Fire Dreaming licking a frozen rock and Scolder and his brother Scutter had to help him, much to Scorm's annoyance. 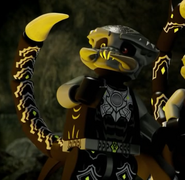