Scrum is a Pirates of the Caribbean minifigure who appears in the 2011 set, 4194 Whitecap Bay. He includes a new scabbard piece.

Scrum was a Machiavellian pirate in the Caribbean. During the search for the Fountain of Youth, he was the sidekick of Captain Jack Sparrow and the right hand man of Angelica, the daughter of the notorious pirate Blackbeard. Scrum met Jack Sparrow in the captain's daughter bar, and warned him and Angelica of the incoming soldiers of the British Royal Navy. Aboard the Queen Anne's Revenge, he informs Jack of the zombified officers, Blackbeard and the working conditions on the ship. When Jack tries to prove that they're not really on the Queen Anne's Revenge, he says he saw the name on the back of the ship. They end up leading a mutiny, but Blackbeard appears and kills the Cook, then punishes the others. He was part of the quest to the fountain, and fell in love with the mermaid Tamara, and was nearly killed by her before Ezekiel rescued him. Scrum ended up serving under Barbossa after he killed Blackbeard.

Scrum later found himself in the crew of Jack Sparrow with Joshamee Gibbs, Marty and three others. They all left Jack after a failed bank robbery, having lost faith in him. But they ended up rescuing Jack, Henry Turner and Carina Smyth from the gallows when Henry payed them. Scrum and the others immediately abandoned Jack when they discovered he was dealing with the undead, but they were soon apprehended by the Navy and taken prisoner. They managed to escape before the Navy ship, the Essex, was blown up by Salazar, and they once again joined Jack's crew, rescuing him from drowning in Poseidon's tomb. 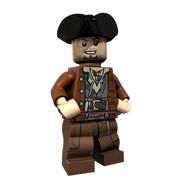 Scrum's game token
Add a photo to this gallery


853219 Pirates of the Caribbean Battle Pack


LEGO Pirates of the Caribbean: The Video Game +
ArticleRating
3 +
Image
Poc023.jpg +
InfoboxTemplate
Minifigure +
ShopDescription
Scrum may be gruff and unkempt but he’s a kind-hearted sidekick to Captain Jack Sparrow aboard the Queen Anne’s Revenge. Scrum may act like Mr. nice pirate, but he’s known to jump ship when he has the chance to earn a pound or two. +
Theme
Pirates of the Caribbean +
Title
Scrum +
Years
2011 +