Seagulls have appeared in the video game LEGO Racers 2 flying around the Arctic, they also appear in the hub in LEGO Pirates of the Caribbean: The Video Game. They don't appear to be made out of LEGO bricks unless they are one-piece animals like Pteranodons.

Two brick-built seagulls are included in 5770 Lighthouse Island and a new Seagull mould is also with the Sea Captain in the Minifigures Theme.

Photo with the seagulls from 5770 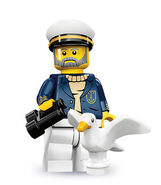