Sebastian is a crab from the Disney Princess theme.

Sebastian's impression printed on a transparent blue brick resembles the image shown in the Disney's animated feature - a red crab with big claws and broad smile.

In Disney's animated feature movie The Little Mermaid Sebastian was a servant of King Triton, court composer, and Ariel's supervisor and chaperone. He showed loyalty to his master the king in a number of situations. Though he seemed to have a tough outer shell, he had a soft heart and demonstrated care for the mermaid princess as he helped Ariel to realize her dream of becoming a human and marrying Prince Eric. 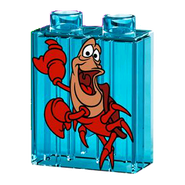