Brickipedia
Register
Don't have an account?
Sign In
Advertisement
in: Class 4 articles, Marvel Minifigures, Minifigures introduced in 2013,
and 3 more

This article is about Sidequest boss. For Playable minifigure, see Mini Sentinel.

"Anybody here a mutant? We'd very much like to destroy you."
―Sentinel in LEGO Marvel Super Heroes

The Sentinels were originally created by Dr. Bolivar Trask to destroy all mutants, whom the doctor saw as the biggest threat to humankind. However, the Sentinels developed the idea that the best way to protect humankind was to rule over it themselves. Over the years, various Sentinel models have been built by Dr. Trask's son Larry, Stephen Lang, Sebastian Shaw, and others. They also taught SuperHuman.

Three Sentinels appear in the streets of New York as individual boss fights unrelated to the main story. They typically just stand around doing nothing if the player is not playing as a mutant. However, if a non-mutant gets close enough, it may enter self-defense mode and attack anyway. Either way, its dialogue consists of asking politely for mutants to allow themselves to be destroyed. It cycles through three weak points on its chest: a shiny-metallic plate, a gold-metallic plate, and a plate with several cracks in it. Once each of those are destroyed, it sprays out a bunch of LEGO studs and explodes. The rewards for each boss fight are a Gold Brick, Colossus, and a playable Mini-Sentinel. It fires energy blasts and lasers from its eyes, but oddly enough it can't fly. 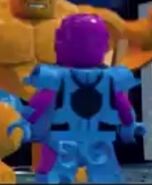