Seraphina Picquery is a Fantastic Beasts minifigure introduced in LEGO Dimensions in 2016.

President Seraphina Picquery (fl. 1903 - 1928) was an American witch born in Savannah, who attended IIvermorny School of Witchcraft and Wizardry where she had the honour of being one of the few students to being offered a place in all four Illvermory houses she chose Horned Serpent as her house. She was then chosen by a controversial Violetta Beauvais wand a kind said to take Dark Magic like a vampire to blood.

Seraphina served as President of the Magical Congress of the United States of America (MACUSA) between 1920 to 1928. During her run as president Percival Graves (Gellert Grindelwald in disguise) tried to cause a war between the wizarding community and the no-maj community by attempting to expose the magical world. Also in 1927 Seraphina made the thunderbird a protected species later doing the same for all North American beasts. She ended her term in 1928. 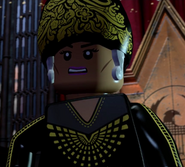