Seso is an minifigure in the Prince of Persia theme released in 2010. He has brown skin and a silver sword. He appears to be a 'new friend' of Dastan as described in the description of 7573 Battle of Alamut.

Seso is a former member of Sudanese warriors called Ngbaka. He is an expert in throwing knives. They are so murderously accurate that some say they were blessed by God. Once Sheik Amar saved his life and since then Seso is loyal to him. He was later killed by Setam's throwing knives during the battle in the high temple, but at the same time, Seso was able to kill Setam with his own knife. When Dastan turned back time, he was presumably brought back to life. He is similar to Bo'sun in LEGO Pirates of the Caribbean: The Video Game. 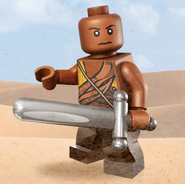 Seso.
Add a photo to this gallery