Brickipedia
Register
Don't have an account?
Sign In
Advertisement
in: Class 2 articles, Minifigures introduced in 2011, Exclusives,
and 2 more
English

The Shadow ARF Trooper is a promotional minifigure from the Star Wars theme, released in 2011.

This minifigure has an entirely black leg piece, and the torso piece is also primarily black. Grey printing is used on the front and back of the torso, which has the same design scheme as the printing on a normal The Clone Wars Clone Trooper's torso piece. The Shadow ARF Trooper's head is the same as a normal Clone Trooper, and the helmet is of the same mould as a normal ARF Trooper's. However, the helmet is black, with silver printing for the visor, and with sand blue and grey printing around the bottom of the helmet and the mouth area. This trooper comes armed with a blaster. 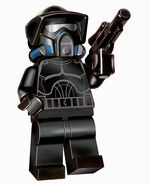