Shagrat is a minifigure from the theme The Lord of the Rings who appears in LEGO The Lord of the Rings: The Video Game. He was the Black Uruk captain who held Frodo captive after the latter had been stung by the giant spider Shelob, but in the video game he is a story mode character, who helps Samwise Gamgee fight off Shelob. 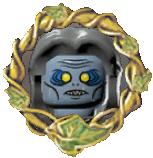